I introduced the Silver Blades to my campaign as potential rivals when the player characters were barely second level (5 years ago at the time of this writing).

The Blades had returned from a brief journey to a small ruin two days to the east of Little Plains where they uncovered some treasure. Talk around town about the group suggested there was much more loot to be had in that ruin and this stoked some interest among the PCs. The party didn't speak with the rival group to learn what transpired so they were acting only on rumors when they decided to find and explore the ruin for themselves.

Later in the game the Silver Blades geared up with wagons, hirelings, and supplies for a journey to an abandoned dwarven stronghold somewhere to the southwest. Their return months later was somewhat somber as they had lost half their number and a hireling, but they had also become very rich.

The player characters were somewhat jealous of the rival adventurers and annoyed by the stand-offish nature of Fertik and his companions.

On another occasion after returning with the corpse of a dead Grell in their wagon the party encountered Fertik in town and learned what it was they were hauling. That was the most Fertik had spoken to them.

While visiting the Silver Blades at their home, Daris the halfling member of the Blades proved illusive as he moved unseen from hiding place to hiding place, throwing his voice and cracking jokes during their conversation. Harak the human fighter only said that the wizard was busy and could not speak with the party.

When the party needed better armaments, the Blades lent the party three magic weapons which were later returned, and gave them 6 magical arrows and a couple of scrolls to keep.

Until the recent events in the campaign, the Silver Blades have left all of the town difficulties to the PCs to handle.

Below the Silver Blades are roughly described. Feel free to steal them for your game. If you are going to use them in an Old School system give them all equal experience points and determine their levels based on XP. Their levels can be whatever you want of course.

Fertik - Human. Wizard 10. - Very intelligent. Limits conversation to relevant information, not prone to make small talk. Willing to offer information on subjects that interest him. He wears dark robes and a black Cloak of Protection, and possesses a magical staff made of black wood, capped with mithril and moonstones. There are cryptic engraved runes spiraling the length of the staff.

Daris - Halfling. Rogue 10. - A wise-cracking jovial individual. He can't resist ridiculous or ironic  comments and puns, especially when he can make them involving the words small, tiny, little, short, diminutive, etc, and have the joke be at the expense of taller people he is addressing. He possesses a Ring of Invisibility, and a pair of magical silver daggers. 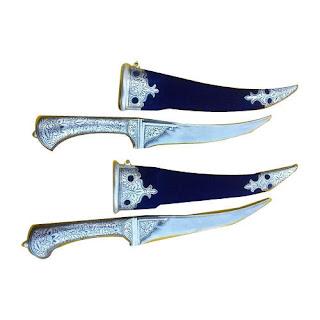