Over the last month, I've delved into a new campaign setting that I vaguely heard about a few years ago: Primeval Thule from Sasquatch games. The setting is a low magic, savage setting.... if you've seen Conan the Barbarian (1981 version), Beastmaster, any Roger Corman fantasy romp... if you like Edgar Rice Burroughs, and H.P. Lovecraft, you get this setting. A successful Kickstarter to convert the setting to fifth edition Dungeons and Dragons was done in 2015. 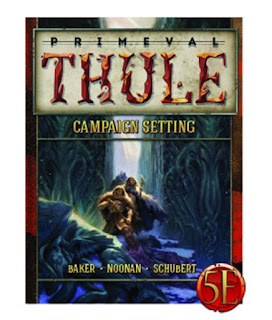 Anyway, I had been running a Monday night game on Fantasy Grounds for Castles and Crusades, but some dissatisfaction on my part with certain participants brought that to an end. Interestingly, after talking to one of my players, he suggested physically getting together on Monday nights, and starting something new. I brought Primeval Thule to his attention, and he was immediately excited about it. We were able to recruit three more players, and voila, we had Sesson 0 Monday night, and the players all created their characters together.

It was fun using Fantasy Grounds on the big screen. Everyone got a laugh as they each, in turn, choose their character narratives. We ended up with a Barbarian named Malstrom.. a former Katagian Pit Fighter, A Warlock named Yara the Bearer of the Black Book, a Druid Beastfriend named Edo, And an escaped pleasure slave Rogue who calls herself Seven. Returning from Katagia, Malstrom and Edo were traveling together as Mal returned to his village of Kalvandahar after years of captivity in Katagia. They encountered Seven (On the run from slavers from Marg) and Yara on the same road fighting a group of Cultists of Set who had attacked them... after the merchant caravan they were traveling with was ravaged by Beastmen. 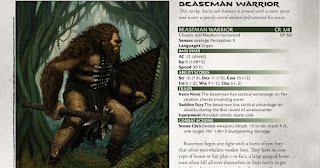 It was a tough fight, as none of them had fought together before, but with great injury, managed to persevere. Fortunately, they were not that far from Mal's home village, and they made it there before nightfall. Mal's father, Thorgran, the village chieftan was none to pleased to see his errant son, as the boy had run off in search of adventure... with his younger brother. A brother that he ultimately ended up having to kill in the pits of Katagia!

Regardless, as was their custom, the injured strangers, asking for aid were given it. Thorgran told his son, that once he was healed, he was to leave Kalvandahar until he found a way to restore honor to his name. Until then, he would be named Kin-slayer! However, the characters learned from the other villagers as their wounds were tended to that the Cult of Set was a problem throughout the region, and that the cultist were kidnapping young women for some unknown purpose.

Malstrom vowed to regain his honor by destroying the Cult's temple, or die trying. Edo the druid, of course, felt that ridding the jungle of the cultists was a good plan and decided to join the barbarian on his quest. Yara, while not really enthusiastic about it, felt a slight obligation to help since the barbarian had saved his life. In addition, Cults of Set were known to gather ancient secrets of the arcane. Seven, also felt some obligation, since the barbarian had saved her life as well, and, Cults of Set were known to have treasure!

Thus, the four strangers were now enjoined as companions on adventure!

Unfortunately, the Cultists were experts at covering their tracks, and no one knew the temple's location except that due to the raids frequency, it must be located relatively close, but difficult to detect in the dense jungle region. The PC's knew that the Cultists had taken the horses from the ravaged caravan, and deduced that horse tracks would be more challenging to cover than a man's. Thus, after healing, they trekked back to the scene of their battle, and together Edo and Mal were able to pick up the cultist's trail.

It took them a full day, but by night fall, at the beginning of the new moon, they found what they were looking for. Off in the distance, by firelight, shadowy figures danced and chanted atop a massive stone ziggurat, as they performed some type of ritual. A woman's desperate screams rang out in the night, and the characters sprang into action.

With a quick, but rather stealthy storm to the top of the pyramid, the heroes came upon a vile scene. Cultists gathered around a stone alter, daggers in hand, and chained to the thing, a nubile young lass, surely about to meet a horrid and bloody end! The battle was joined, and now, with some idea of their abilities, they worked together to lay the evil Cultists to ruin. 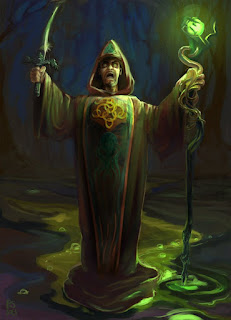 They freed the captive girl Valesska, and learned she was from one of the nearby villages, and that others were being held in the temple. In addition, the stone stairs at the top of the ziggurat, clearly lead downwards into the heart of the temple, and surely more cultist and who knows what else lies within! To be continued next week! 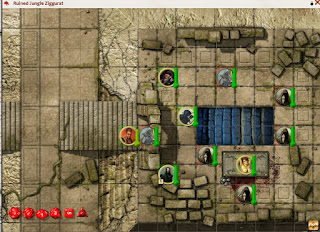 Posted by captcorajus at Tuesday, August 15, 2017 No comments: