I'm stunned at how much I pretty much hate everything about this show. The plot was full of holes, and the cinematography gave me a headache. The "Micheal' character is a Mary Sue, the Vulcans can communicate telepathically over thousands of light years, the 'Klingons' actions don't make any logical sense. Why did they decide to follow Vos..... or whatever his name was, other than it was in the script? "Let go to war with the Federation.. those guys are assholes!" Other Klingons, "You're not even on the council, who the F.... are you?".. "I'm the guy that found a ship and stuff, and I say lets fight these guys! Oh yeah, prophecy and stuff" .... The rest of the Klingon houses for no apparent reason, "Mmm.. yeah, sounds good!" Every time they spoke Klingon it was over enunciated, and laborious to listen to. The Fed Captain.... like hangs out in space just ... what a few hundred feet from the massive klingon vessel that decloked out of nowhere off the starboard bow?" How about an 'evasive maneuver' captain?" Nah.. we'll just float statically right here. What could go wrong?"

I was not a fan of the 'odd angle/ 1960s batman hurky jurky, lens flared... shades of JJ Abrams camera work. That's a matter of personal taste... it just seemed like.. "Oooh.. look how creative and edgy we're being'. Style for the sake of style. I don't really care about 'the uniforms', or the 'Transporters aren't the same' or any of that. IF the story and characters are interesting, I'm in. It WAS well acted... The awkward klingon speech was just... weird. It wasn't spoken like a people who grew up with the language, but since all of them spoke it that way, I can only conclude that was the direction given to the actors.. which is strange, because it pulls me right out of the story, because I can't help thinking, "Why are they talking so awkwardly?" 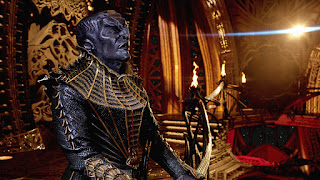 What is this suppose to be? A Drow-Klingon?
He looks 'fabulous' doesn't he?
What 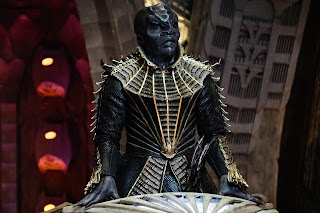 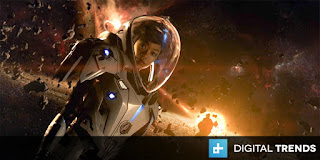 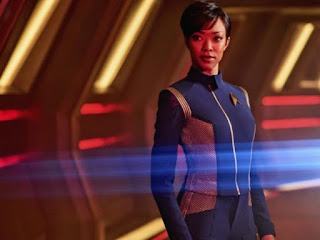