Another of the rewards from the Ptolus update Kickstarter a couple years back is the book of new adventures titled Ptolus: City of Adventure. It contains three adventures within the setting, Doctrine of Ghul, The Runeblood Blessing, and Return of the Ebon Hand. All three have already been released in .pdf form to the backers. All three adventures are aimed at characters of level 5 or level 6, but can easily be modified to allow for other levels (easier upward I think).

Monte Cook Games recently announced the pending release of the softcover book through their online store. Anyone will be able to purchase the book, and backers will receive it for only the cost of shipping.

The first of the three scenarios, Doctrine of Ghul, is time sensitive with the characters racing against a potentially permanently lethal deadline. There is a lot to like in the adventure, but there are a few very dangerous points that can derail not just the story, but even the campaign. I may be running this one for my group, but it will require some re-engineering to avoid a disaster. Run out of time and any characters affected by the hook are just gone.

In the early .pdf version there are some discrepancies with the Challenge Rating of a few of the NPC antagonists. Pella should be a CR 6 instead of CR 5 based on the Mage character type in the NPC section of the Monster Manual. Pella also has an extra capability, but I cannot see pushing her CR to 7 because of it. The Formless Hunger might actually be over valued. I seems like it is pretty close to the capabilities of a Gelatinous Cube which is CR 2, but with a few peculiarities. Alberik Vormund is clearly about two CR below what he should be based on capabilities (8 instead of 10). Sadly these issues were not corrected for the print version.

The more egregious of the mistaken CR values occurs at a point where the NPC could easily TPK a party that are likely nearly out of resources and very low on hit points. Action economy aside, there are abilities available to the opponent that can partially shut down PC effectiveness and the firepower of the foe is great.

Doctrine takes place both in the city and in the dungeons and caverns below.

The second adventure, Runeblood Blessing is the real gem in the trio. I cannot give enough praise about how solidly this one has the feel of the setting. It is packed with sidelines that make use of the core elements to add flavor through the course of events. Several districts of the city become sites of activity as things progress and I find that exciting because the city deserves to be explored and experienced.

The core of the plot involves a pair of NPCs granting some advantages to everyday residents on up through delvers, and even members of the nobility. Of course with the gifts comes the cost. While fortunately this adventure doesn't have the race against the clock urgency of Doctrine of Ghul, it does still give a sense that things cannot be ignored for long.

Characters will need to do some investigating to sort things out, but the central focus and the various sidelines make the process fun. There's also a little twist for the purpose of aiming the PCs in the direction of the root issue, and to give them a chance to get involved in something positive.

I don't recall finding any CR problems with Runeblood Blessing like there were in Doctrine of Ghul and there's nothing in it that is likely to wreck your campaign. It is high on my list for possible inclusion in my game.

Third and definitely my least favorite of the adventures is Return of the Ebon Hand. It explores aspects of the setting faithfully, though it fell somewhat flat for me.

The scenario takes characters into the dungeon below the city, but the hooks that get them there might be ignored without working in connections the players will feel inclined to pursue. The fix for this deficit is simple enough so you shouldn't write this one off. There is enough here to keep a dungeon focused party interested for some time, and the amount of available experience points will certainly keep level grinders invested.

Encounters within feel too tightly packed, but maybe the close proximity of everything is meant to evoke a sense of claustrophobia or to hearken back to some of the old dungeons from the early days of D&D.

Everything about the dungeon and the inhabitants carries a weird and sometimes intentionally horrific vibe. Characters will definitely feel the need to put a stop to the machinations of at least one of the three factions they'll interact with. Also important is the fact that the Ptolus setting has a way to fix almost anything that might affect characters in a negative way.

Maybe Return of the Ebon hand is a better adventure than it feels to me. It is entirely possible my mood wasn't right when I chose to read it through. You should certainly give it a look to see if it would work in your campaign. I haven't had a chance to introduce the party to the Ebon Hand so using Return is not in consideration till well after that happens. 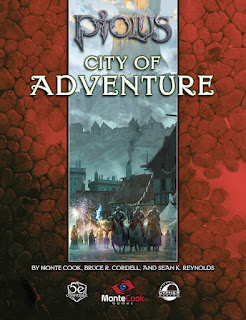