The Realm Works kickstarter managed to catch fire within the last 6 days and blew past the funding goal all the way past the highest stretch goal and pending a count of gift purchases may have made the 2,000 backer goal as well.

I'm anxious to get my hands on this software so I can begin loading material into it in preparation for future campaigns.
Posted by OSRbaron at Monday, February 25, 2013 No comments:

Over this past weekend the apartment of Ernie G. Gygax Jr. burned down. Fortunately he, his roommate and his dog are all safe. Sadly he lost everything he owned to the fire.

If anyone wants to lend a hand you can check out the Facebook page for the relief effort.

Posted by OSRbaron at Tuesday, February 19, 2013 No comments:

Certainly most people have heard the news by now that a certain major religious figure has decided to retire instead of dying in office as most of his predecessors for the past 600 years have done.

Did you however know about the alleged prophecy about this event? And that the next person to hold the position would be the final before a great apocalypse?

I suppose it doesn't matter that the supposed document detailing the prophecy has supposedly been in the possession of the organization, that decides who gets the position, since it was written. After all, nobody would believe that such a group would use it as a guide to create a self-fulfilling prophecy would they?

This stuff requires very little effort to translate into a fantasy game scenario. It almost writes itself. Just change a few details and names, and whallah!, instant rpg material.

Example: A large religion that is falling on hard times and realizing it is declining begins lauding a prophecy of approaching end times in order to frighten the populace into conversion and obedience to the church of their Deity (the only hope of salvation). They spread stories of a holy text that predicts a series of vague events and tenuous connections to people and places. Then they set about creating these things while preparing a major plot to actually cause the apocalypse if the people do not do as they wish.

There's a lot of game worthy fodder to be found in the news.
Posted by OSRbaron at Friday, February 15, 2013 No comments:

There are an amazing number of things happening in real life that can translate into fascinating game scenarios.

Take for instance this farmer fighting court battles against a giant agribusiness all the way to the highest court in the land.

A soybean farmer bought genetically modified seeds from a major agribusiness that are resistant to the other product they make that he uses - weed killer. Regular soybeans die right along with the weeds when the weed killer is sprayed on the crop.

There is a contract saying that he cannot save seeds produced from the resistant crop or purchase saved seeds from a resistant crop from another source and use those to grow more soybeans and instead the farmer is required to pay full price to buy more seeds directly from the giant agribusiness.

The farmer wanted to plant a second crop after harvesting the first crop so he went to a grain elevator and purchased seeds that were a mix of organic and these genetically modified seeds. Since they were all mixed up there was not a way to pick through and identify the difference.

He is being sued by the giant agribusiness for breaking the rules.

The giant agribusiness has about a 90% share of the soybean seed market so it wouldn't be cost effective to have separate grain elevators for the organic seeds. If the farmer wants to do a second crop he is mostly stuck paying full price for the special seeds.

This can be translated into a game scenario somewhat like this:

"Helpful druids" provide assistance to farmers by offering something special to destroy crop harming things. The special something harms the crops as much as it harms the crop harming things so the "helpful druids" provide special seeds that the special something won't harm, but require that the farmers plant only seeds bought from the druids when planting new crops, not any saved from previous crop yields or bad things will happen. Then the "helpful druids" limit seed availability or tighten the cost screws on the farmers to squeeze them for everything they can get, or something similar.

As a DM that has always needed help with organization in some form or another, anything out there that might help has drawn my interest though not always my commitment of funds.

A recent example was during the Firefly/Traveller one-shot I was running for the weekly group. I forgot my layout notes for the building where the characters were conducting a heist and instead of a rip-roaring demolition of priceless antiques during a firefight, the characters had a somewhat anti-climactic shootout in a stairwell. The game moved at a decent pace, but I was left kicking myself for missing out on delivering that scene in a more dramatic and fun way.

Since I am planning to run another campaign in Monte Cook's Ptolus in the not too distant future I desperately need something to help make all the information much easier to use.

Mind, not all the organization in the world will prevent missing some things, but the older I get the more a tool that brings everything together in one place and aids in keeping track of plot lines, what info the characters know, special calendars for the campaign, linking of information at a glance, relationships between npcs, etc, certainly will help.

Thankfully it appears such a wondrous tool will be available very soon.

Check out the Realm Works Kickstarter. If you want something that should make your job of preparation and organization for play easier, this looks like the right tool for the job.

I jumped into it as a supporter a couple days ago and with several days remaining before the funding deadline on February 24th it still has a ways to go, but is moving toward the goal and might just make it. Even if it doesn't fund, the product will still launch a bit later and maybe a few features shorter, but I'm going to get this thing either way since it is already a functional, nearly complete thing and not just some one's wishful thinking.

Realm Works has numerous features I have been pining for as a DM so it easily fell into my must have category. I could list these things here, but the kickstarter page says and shows it all much better than I could.

Once I have the software and have had time to put a bunch of things in and test it out I will put up a review. There are already a few out there who have previewed Realm Works including the folks over at Gnome Stew.

I strongly urge DMs to take a good look at this kickstarter and hopefully you will decide to help fund it.
Posted by OSRbaron at Wednesday, February 13, 2013 No comments:

I recently went on a business trip and rediscovered something I have been quietly aware of since the first days of playing rpg's, that odd little experiences and details can be translated into gaming easily.

For instance, while returning to my hotel room to drop off my jacket I spotted a single stray glove laying in the hallway with the fingers toward my room door. 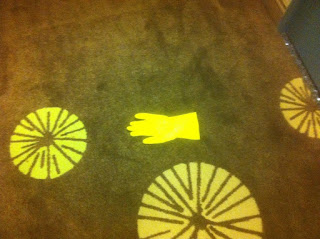 Translation: random dungeon dressing, or a clue to something more?

How did it get there, how long has it been there, why only one glove? Is it a warning or just happenstance? What happened to the owner?

In reality it was just the housekeeper having dropped a glove from her cart while trundling down the hall from room to room. As inspiration for something in a game it could be almost anything.

Another instance which I lack a picture for, there was a toddler's shoe laying at the side of the road. The myriad things that image can lend itself to are enormous.

Gary was brilliant for putting the random dungeon dressing tables into the 1e DMG. Think of the fun you can have sitting back and letting the players speculate their way into plot lines right from how their imaginations perceive the meaning of a random bit of clutter.

Let's have a little contest. Email me your ideas for the shoe and how the glove relates to it. I'll pick the winner from all entries received before March 1st 2013, and as long as you have a PayPal account or are near enough to Frederick, Maryland, I will pay you back for 1 item up to $25 value that you purchase from my zazzle store.

The zazzle store link is on the upper right of the blog page.

The winner will have their entry posted on the blog in early March.

Posted by OSRbaron at Saturday, February 02, 2013 No comments: