On The Eve Of Battle

Tomorrow is the day of battle.

Tonight and early tomorrow I will gather my implements of mayhem and set forth to the site of play. I will perform setup and await arrival of the 6 players whose characters face certain death, er, I mean nasty business, on the island.

The adventure is based loosely on the plot from the adventure Island of the Abbey from Dungeon Magazine issue 34. 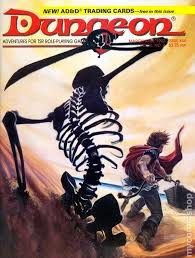 The cover says it all, well for the red-shirts among them.

Counting Down to Go Time

In six days I will again be behind the screen.

I have an adventure cooked up to throw at some players, two of which have never played D&D on the table-top before. The adventure is based on the general premise of an old Dungeon Magazine adventure involving an island, some ruins, some pirates, cultists of an evil entity or god, and of course the search for treasure.

Here is how it is being presented to the players:

You have been hired by the Mariner's Guild along with some ship captains and wealthy merchants to go to Gull Cliff Island. They plan to build a new lighthouse atop the highest point of the island, and hired you to clear the island of hazards and find out why the old abbey on the island caught fire three weeks ago. They also asked that you try to locate the first expedition that should have returned a week ago.

The religious figures among you were also asked by an elderly priest of Phaulkon (a lesser sea god) to recover from the abbey an ancient tome, a holy book titled 'Integumentary of Spirit'. You have been given a key with markings he indicates will help you locate the correct location of the text, though he warns it likely is guarded or trapped. He promises to reward you with what he can and that the church will also reward you for recovering this important tome.

Among your party is a sea captain with her own goal on the island. She possesses part of an old captains log with a partial map, and journal entry alluding to treasure and a scrimshaw whale tooth of above average size that is the means to find a greater treasure on another island.

- - - It is morning as you make landfall on the southern tip of the island, but you wouldn't know it due to the heavy storm clouds overhead, the driving rain, and the choppy sea. Two ships crewmen drag lines beyond the tall sand dunes to tie up the three dingies your party arrived in, while a third unloads your supplies at the shoreline. As you don your armor and weapons you hear screams from beyond the dunes . . .

Being most likely a one-shot or at best a mini-campaign, I want to throw them right into the action so that the newcomers get some immediate excitement and they all get a sense of danger and wonder about the island. The story will progress from there.

The Thief Lord's reputation is Intact.

In the C&C campaign that has now converted to a D&D 5e campaign, the party were in the Thief Lord's Vault to recover the Eye of Set and anything valuable they could manage to carry.

In the party's lust for loot, they ignored the obvious indication of a trap and went right to the looting stage. Hundreds of thousands of coins, thousands of gems, magic items scattered about, it was a cornucopia of treasure and a slush fund with the potential to hire or bribe almost everyone in the city and have plenty left over. So the party waded in, feet sinking into and sliding among the coins and baubles. 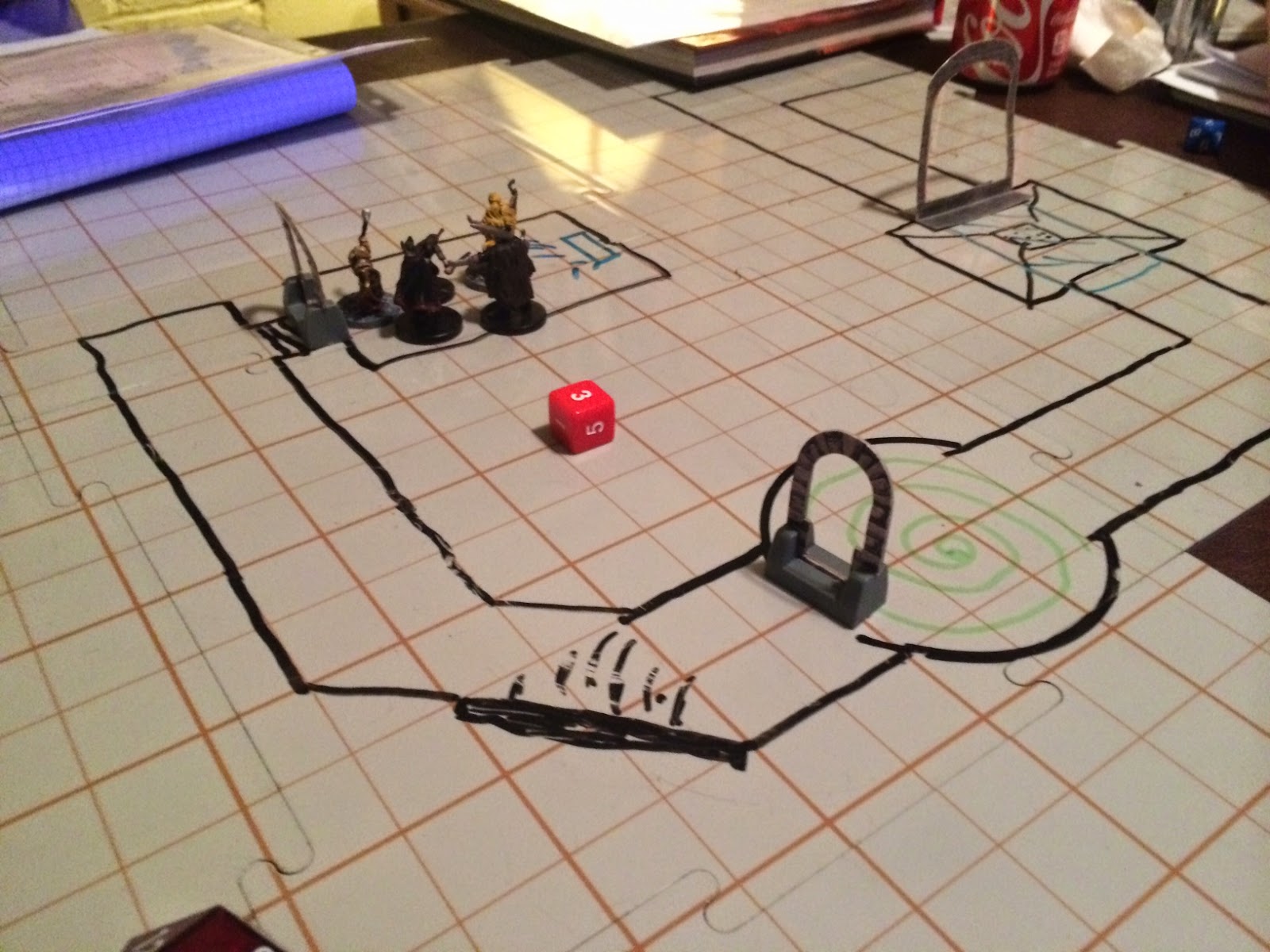 At the far end of the chamber was a mirror looking object that held no reflections. That was to be both the party's downfall and salvation.

The dwarf cleric was using detect magic and his gem of true seeing (which he had mounted into an eye patch) to locate the magic items. Pilfering of the goods had begun in earnest when the trap finally sprung.

A loud KA-THUNK sound accompanied by shaking and rumbling signaled the sealing of the entrance door and the start of the entire vault tilting toward the end where the weird mirror sat. Footing quickly became an issue with everyone slipping, sliding, some falling down, and all being moved along by the landslide of treasure. The dwarf (player made some excellent rolls) managed to stay atop the treasure and rode it like a surfer while gathering magic items along the way. The rest of the party tried to keep from being buried and crushed by the coins and other valuables. It rapidly became obvious, risk jumping into the mirror portal (treasure had begun pouring through it) or being crushed beneath tons of treasure.

Everyone chose to make the leap of faith that the portal was not a death sentence.

Moments later, bruised, battered, and piled up with a mound of treasure that came through the portal with them (we estimated about a third of the Thief Lord's ill gotten gains came through with our characters) the party felt noticeably different. (out with the C&C, in with the D&D)

The room the characters occupied was damp, vines and roots protruded from the walls and ceiling, the air was thick with humidity and hot. The place also had a swampy, fishy odor. Well, this much was certain, the party was not anywhere near Karameikos anymore, but if they could bag up the best stuff from this pile of loot and find civilization, they would be set!

Oh, right, Set . . . the party still possessed the Eye of Set which was still obviously evil. That loose end is still hanging out there to be tied up eventually.

Where were they? That question was on every one's mind, but not for long as they were rudely interrupted in their bagging of wealth by a number of Kua-Toa warriors and some of their lesser priests. Good for the party they controlled a choke point and the pace of the fight that followed.

The three Monitors (lightning casting lesser priests) and more than half of the warriors were killed and the remainder ran away. The characters went back to looting and then began trying to find a way out of the structure they were within.

After some skulking about and convincing the dwarf they could always come back for the treasure they couldn't currently haul out with them, they encountered three more priests hauling a big soggy mud ball of branches, vines leaves, and other unidentifiable organic matter. Setting upon these Kua-Toa, the party slew two immediately, but not before they blasted the ball of doom with lightning activating the hibernating Shambling Mound.

Now the fight got interesting.

It lasted 3, maybe 4 rounds during which the two fighters, the crossbow sneak attacking rogue, and the elf wizard took the shambling mound to task and the dwarf cleric focused his ranged wrath on the remaining priest. The 136 hit point shambler failed to harm anyone and was destroyed by what can only be described as a hail of utter destruction from the 5th level D&D 5e characters. The Monitor surrendered and despite lacking any clearly comprehensible means of communication was convinced the best option was to show us the exit.

- 5e characters, even from 1st level are brutally capable combatants, getting to 5th level it is amazing the damage they can dish out. The rogue was doing the most damage thanks to being able to use sneak attack at range every round. When the rogue critical hits with a sneak attack the damage is incredible. The wizard only had cantrips available otherwise my guess would be that the combat would not have gotten much beyond the first round or barely into the second round instead of 3 or 4 rounds.

All said and done, the party was shown out without further problems and the Kua-Toa even brought up 6 more bags of loot to coax them to go away.

The party located a structure to use for shelter and prepared to get a long rest. That is where things left off.

The DM is a huge fan of Mystara and associated D&D worlds and after the session we determined the party had been ported into the Hollow World.

And that is why the Thief Lord always maintains his reputation for enemies disappearing permanently. It might take a while, but our group wants to change that equation when possible.


Posted by OSRbaron at Wednesday, September 10, 2014 No comments:

The Sunday C&C game in which I participate is about to convert over to D&D 5E. I noticed some interesting differences in the character between the two systems.

Torul is a half-orc fighter decked out in plate armor and shield, wielding a longsword (+2 flame-tongue).

His AC managed to remain high (higher than many adult dragons based on the info from Hoard of the Dragon Queen). His attack roll lost a single point with the longsword, but more with the dagger (formerly a dirk), and the light crossbow.

He now has 2 and sometimes 3 attacks if he uses his available action surge. His damage potential with a single sword hit is slightly better (Feat: Savage Attacker). His damage lost a point on the switch from dirk to dagger (1d4+1 to 1d4), but can benefit from the same thing his sword does with occasional extra damage. His crossbow now does more damage. He also crits on 19 or 20.

Torul has a Ring of Protection +2, an Ioun Stone of Protection +1, and an Amulet of Protection from Evil. My suspicion is that stacking will somehow be discouraged and that the amulet will likely function as giving disadvantage to evil attackers, which frankly would make Torul even more bad-ass against evil. No idea how the ring and stone will be affected.

What does all of this mean? Mostly that the conversion was easy and relatively painless.

Where does that leave the party tomorrow? Trying to escape from the Thief Lord's Vault with what they believe is the Eye of Set, and expecting a whole crap-ton of enemies to be waiting including some top notch assassins, since the party have a high price on their heads. 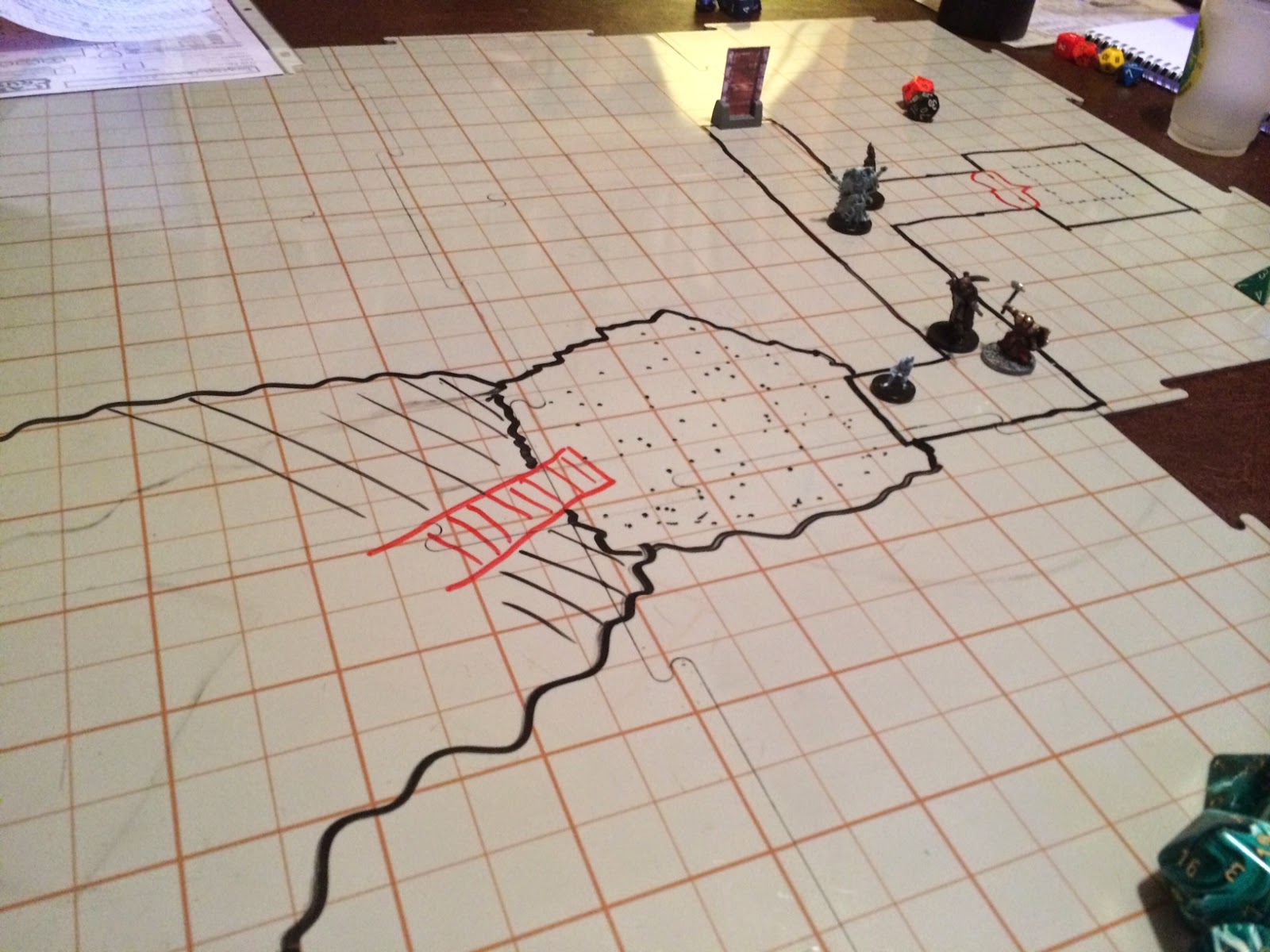 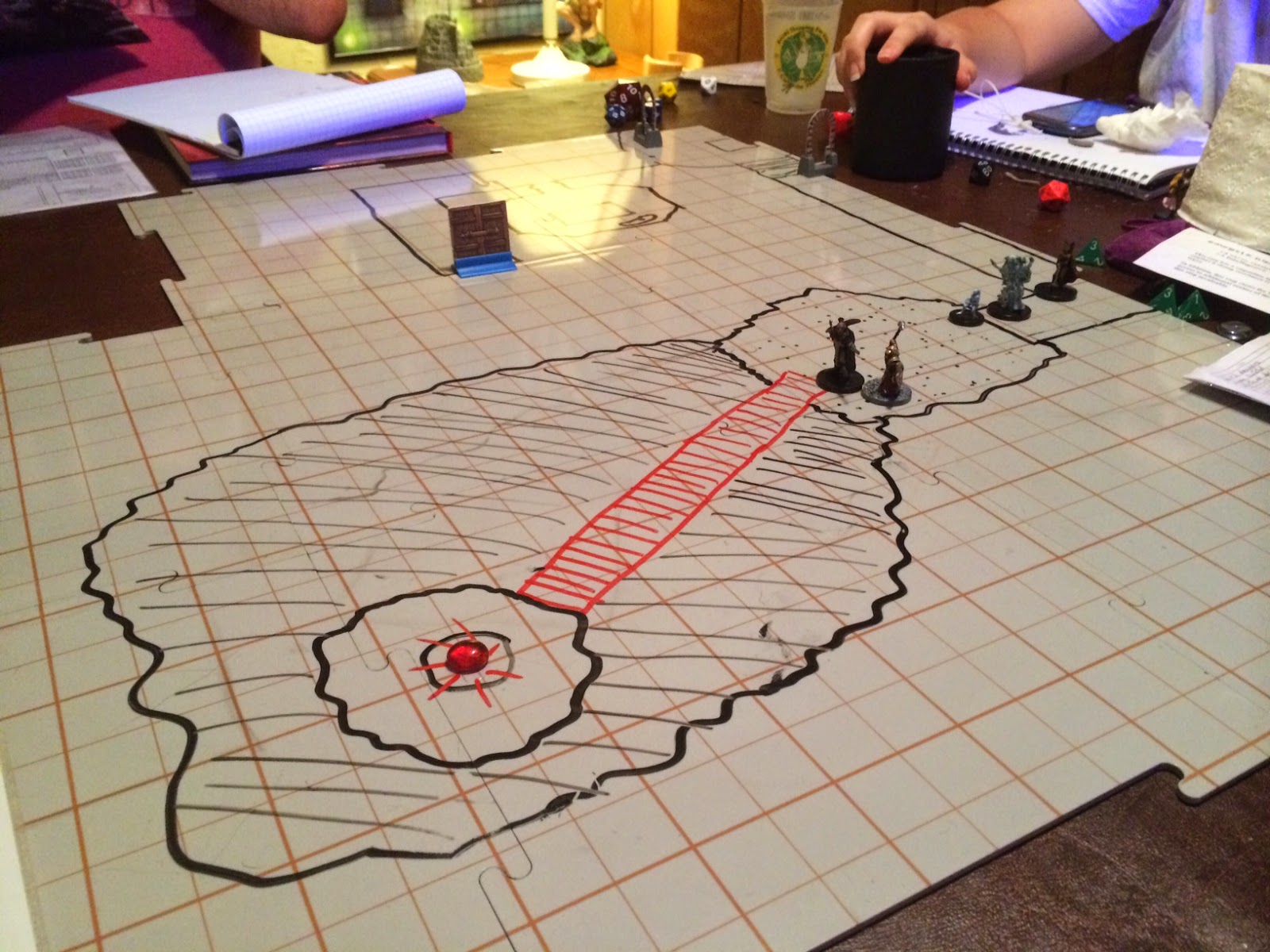 The DM loves his set of original Tact-Tiles and was a backer of the recent Kickstarter so he will have more of them sometime soon.
Posted by OSRbaron at Saturday, September 06, 2014 1 comment: