The Joy of Fireball 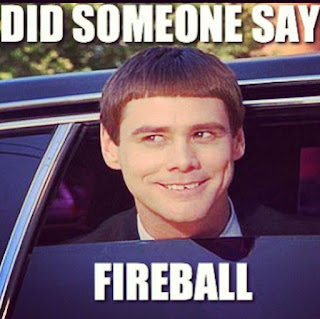 D&D's iconic Fireball spell has morphed over the years from a very dangerous tool that could wreck the persons using it into a more controlled, yet no less useful weapon of mass destruction.
A major drawback to using it in a dungeon during first edition AD&D was the massive volume of space it would expand into, 33,000 cubic feet. (33,000 cubic yards outdoors, and I still don't understand why except to function as an army breaker) This could play havoc on  a careless wizard and their party when loosed in a constricted area and I have experienced this myself on a few occasions. It didn't just fill the small room it was cast into and then stop, it would continue expanding until the entire volume was reached. Mind you, this was only an issue for DMs that were sticklers for rules detail.
Note: I don't really know what radius 33,000 cubic feet makes up, but without a defined radius I do know it can wipe a party out quickly, especially with a math nerd DM calculating who becomes toast. Apparently it works out to 33 10' cubes. 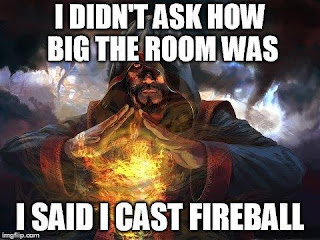 There's a similar issue with a lightning bolt in a short hallway, but that's a discussion for another time.
In fifth edition D&D the fireball is kept to a neat and tidy 20' radius. Yes it does spread around corners to fill that area, so be careful, but you won't be sending a column of flames roaring down a hallway packed with your party members, unless you want to of course and even then it will only go 20 feet. There's also the Evocation School ability to Sculpt Spell which let's the wizard of that school blast enemies around a teammate without roasting said teammate (where's the fun in that?).
So in the current game you don't have much to worry about in terms of fiery self destruction if the caster is an evocation wizard. And that takes away one excuse for getting drunk after a TPK. (That means Total Party Kill for those alcoholics out there that don't play D&D) 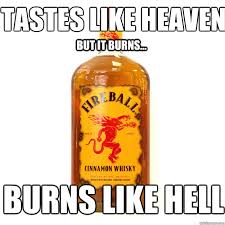