The Red Pen Has A Re-Think

After having the chance to play a session of 5th edition, I am beginning to think that some of what I viewed as negative or optional might just be fine in the context of game play.

While I still think the healing to full hit-points after a full rest is too much, I can definitely see how the other healing methods work well to aid the flow of the game. In fact, the hit-dice mechanic makes for a good representation of fatigue, and other issues, when after a few days of hard adventuring a character could easily find healing up getting more and more difficult when fewer hit dice are returning after long rests.

The ability score increases still urk me, and until the Monster Manual and maybe the DM's Guide are in hand, I won't know if those can be removed or even need to be excised. In the Basic game, ability score bumps are all there are while in the PHB you can choose either a boost in abilities or a feat.

The magic system in 5e is a thing of beauty. Sure, I think the unlimited ammo combat cantrips are somewhat over-powered, and that meant boosting first level spells to a crazy level of damage production (Magic Missile does 3d4+3 damage, split into three 1d4+1 missiles), the flexible use of spells in higher spell slots is awesome. A wizard or other spell caster can take a low level spell and use a higher level slot to cast it making what would have been a minor spell into a more capable/powerful tool.

For example: The Command spell in the hands of a higher level caster is capable of affecting an entire adventuring party because in higher slots it affects more people instead of just a single target. Think of the party bursting into the lair of the evil high priest who simply Commands them to surrender. No longer does one person obey while the rest of the party eviscerates EHP, now they all might fall under the spell and be captured. No more interrupting a well prepared soliloquy, you pesky adventurers are going to have to listen to the grand standing of the big bad boss monster.

The Sleep spell likewise has become more useful. Sure, at lower level it can only do so much, but cast from higher level slots, and based on target hit points, it can be used against the big bad once the monster has been beat down a bit. Got a Paladin or other uber-goody in the party that wants to bring the villain to justice instead of just executing the miscreant on sight? Sleep is now your means of keeping intra-party politics calm.

There is one disappointment I have about the re-writing of spells. As someone that likes to use Enlarge-Reduce spells to break lintels so they crash down on enemies, the re-write rules that out by limiting the enlarge portion of the spell to only fit the area, not expand beyond. At least I can still use the Reduce portion to shrink a door out of its frame.

I've been a fan of the Advantage/Disadvantage mechanic since it was introduced in the first play-test packet. No more having to remember a host of fiddly modifiers. Simple and elegant, and it keeps things moving.

My next campaign is going to use 5e so that it gets a proper vetting from the DM side of the screen.
Posted by OSRbaron at Saturday, August 16, 2014 No comments:

Recently five of us sat down to try out the 5th edition starter set using the pregenerated characters. There were four players and we ended up not having the rogue along with us. We would have benefited greatly from that fifth party member.

We started on the road at the first ambush point where 4 rather stupid goblins (the DM declared them to be morons mainly to get the slaughter on quickly) fired crossbows at the party wounding Ozren and Thundren. Mop-up was very fast. Spells from Therondai the wizard and Thundren the cleric combined one after another to explode the closest goblin with incredible damage (a spell crit happened). The second goblin's head became the world's first golf ball when Ozren's axe sent it flying. (13 damage). The third suffered minor spell damage and tried to flee only to get skewered by an arrow from COUGH. The fourth and final goblin became the firing range for more massive spell damage as 3 Magic Missiles from the wizard rained on his tiny noggin blowin' him up real good.

At this point everyone is thinking, wow, 1st level characters are powerful!

The party located a trail to follow in hopes of recovering the kidnapped hostages. Along the trail COUGH stepped into a snare trap and swung upside down for a bit. Further along the trail Ozren, while lecturing COUGH about being wary and more careful, triggered the pit trap and barely avoided falling in.

We eventually came to a cave entrance from which issued a steady stream of water. Two morons nearby compleately failed to notice the clanking menace approaching so we prepared our ranged attacks to be followed by spells if we failed to kill them on first shots. Fortunately we slew with javelin and arrow.

Entering the cave with the dwarf and elf alternating scouting duties (they were the only ones with dark vision) we were rudely shouted at by some wolves chained in a side cave. Throwing them a dead goblin to eat, quieted them down and we went past them along the stream.

Further into the cave we discovered a rope and plank bridge crossing above the stream. COUGH with the help of a rope managed to climb up onto the bridge and get attacked immediately by goblins we failed to notice. Meanwhile deeper in, another goblin released water from the dam causing it to rush down toward the party. 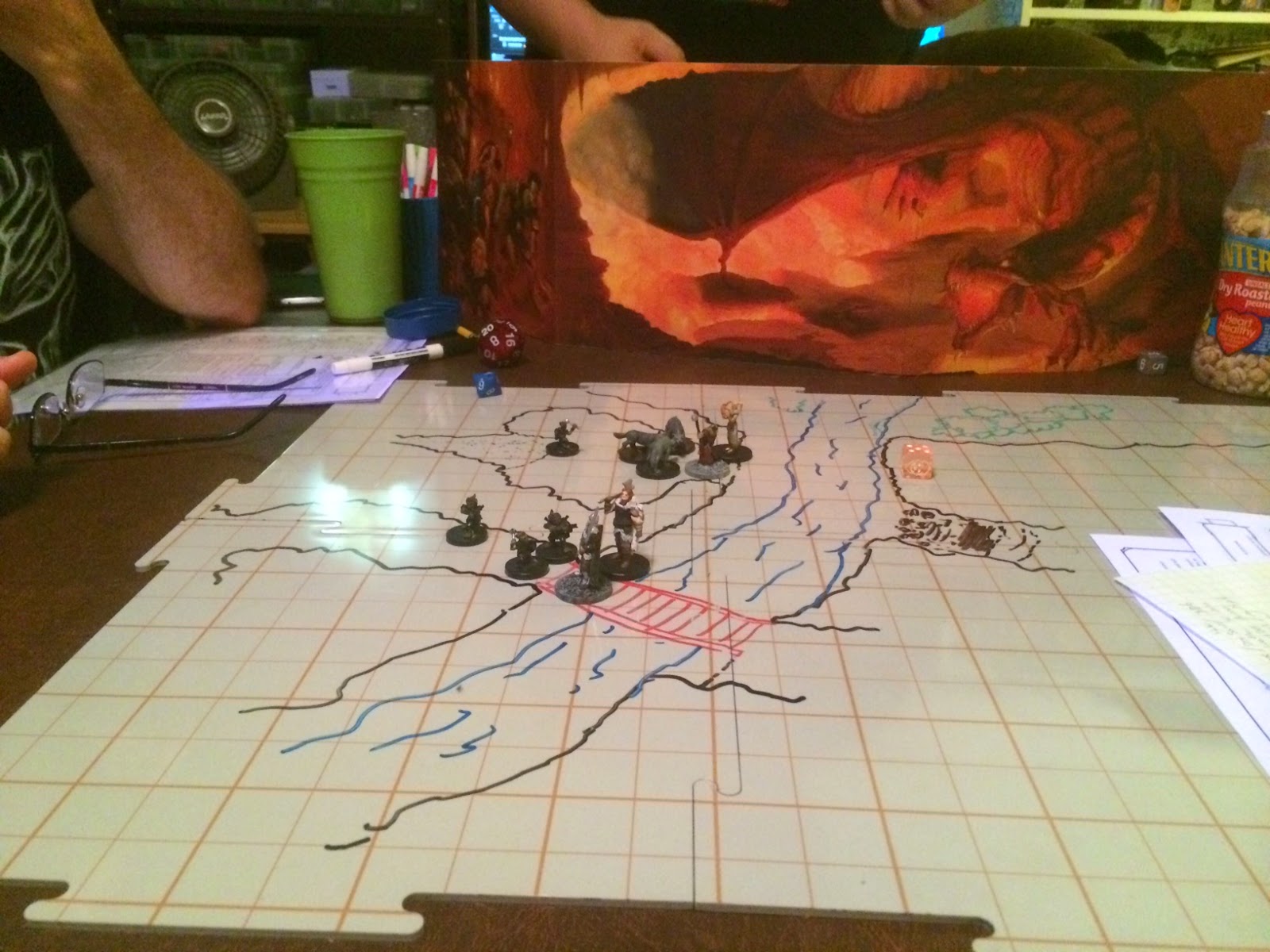 Thundren and Therondai retreated to the wolf room to get above the rushing flow and Ozren braced himself hoping to maintain footing so he could follow COUGH onto the bridge.

Back in the wolf room a goblin arrived to release the wolves from their chains only to become moron bar-b-que when a quick thinking Therondai unleashed Burning Hands. You think wet dogs stink? Try severely singed wolf fur! Another round or two and the wolves were all dead, right along with the goblin that set them loose.

Meanwhile at the bridge COUGH was handed his backside and dropped by some goblins in the side passage. Ozren managed to pull himself onto the bridge and began separating goblins into smaller pieces. Eventually the party regrouped and COUGH was stabilized and healed.

With all members of the party now on the bridge, the group moved into a tunnel opposite the one the goblins that mugged COUGH had come from.

That's when the party got careless and walked into what could easily have been a TPK had it not been for a not so moronic goblin having need of someone to go kill a bugbear that was making itself worthy of a good killin'. 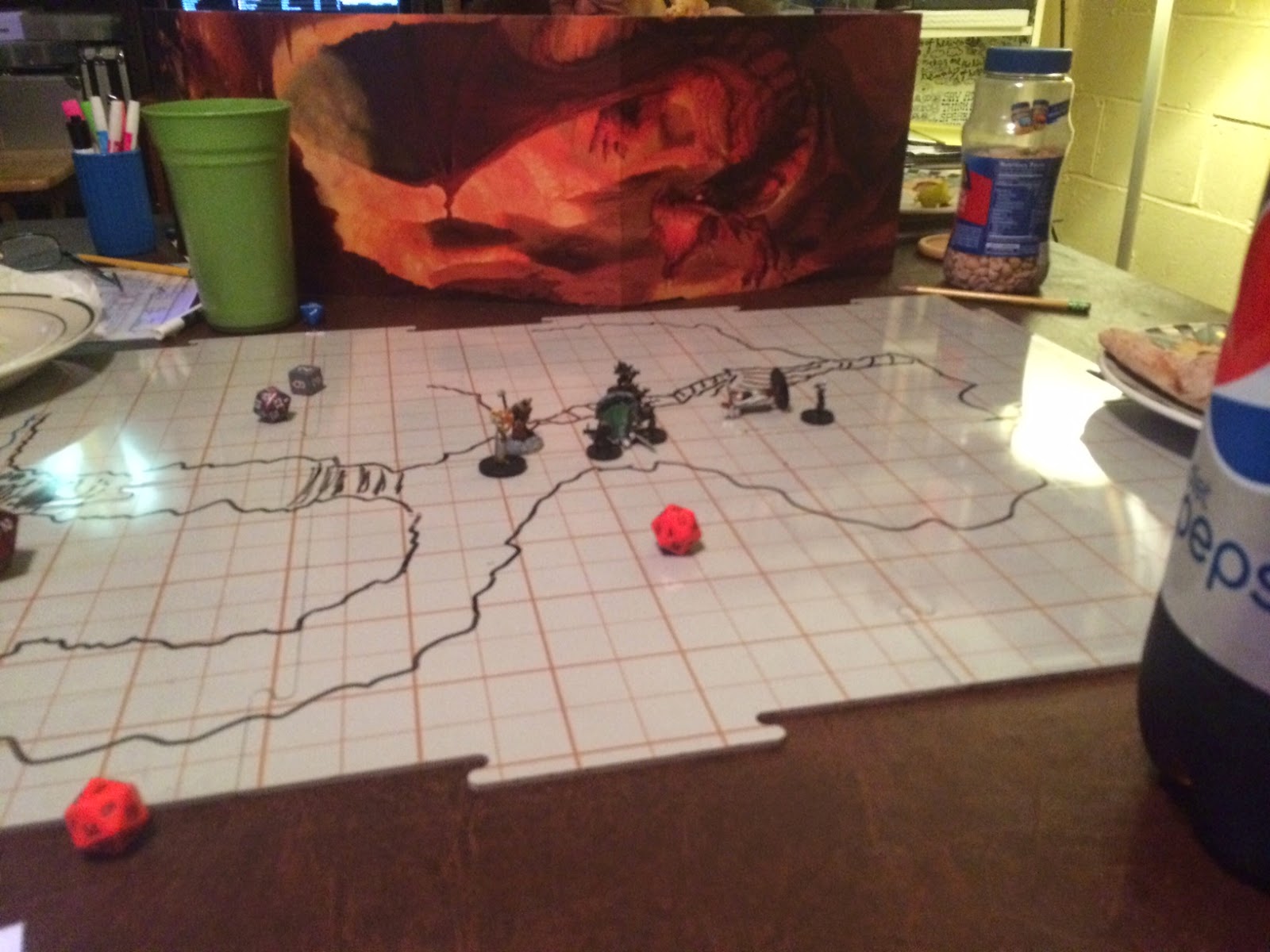 Three party members were down, chained to the cave wall leaving the cleric to negotiate for the entire partys' lives. He agree that if he could rest for a day and say his prayers that he would take on the bugbear by himself. And so it was.

Clerics apparently have some serious combat spells now because not only did Thundren manage to take out the bugbear, he also slew the pet wolf he had not been expecting to be there.

The party was freed, given back their property, minus their money (call it the hotel bill) and sent on their way.

That is where we left off.

I'm happy to report that despite making some minor goofs with using the new rules, the game plays very quick, and feels very much the way I like D&D to feel. Everyone agreed we want to play more when schedules permit and to continue with the pre-gen characters until we complete the adventure from the Starter Set.
Posted by OSRbaron at Wednesday, August 13, 2014 No comments: