Coming up for air

I am not the best at keeping up this blog, longtime readers are well aware of that information.

I hope to find some motivation and at least briefly update gaming goings on.

Way behind on writing up sessions of both my campaign and CatCorajus' campaign.

Let's see, in the Cap's campaign:

party convinced 4 frost giants to turn on their white dragon overlord and they and the party escaped from the Hollow World (dragon still lives, holding eggs hostage can work sometimes)

got back to outer Mystara to find the political situation completely screwed up, we arrived through a portal inside a vault only to exit the door to find ourselves in the castle dungeon, freed prisoners, made dramatic escape, joined resistance forces loyal to Karameikos, been escaping from enemies by skin of teeth ever since, completely out-matched, outnumbered, out of our minds to think we can fix anything, trying anyway.

if I get around to finishing the post in my drafts folder it will catch things up, have not run any more of it in months

Recently discovered a West Marches style campaign on YouTube (Rollplay West Marches) and have watched a bunch of episodes. Will hopefully talk more about it in later posts.

I leave you with this picture for no reason what-so-ever: 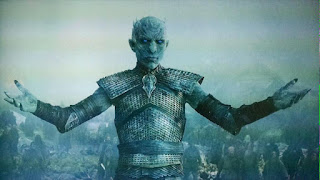