More previews from the Dungeon of Doom kickstarter. The awesome continues. 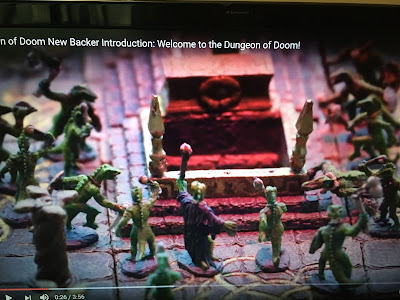 The Dungeon of Doom kickstarter is about half way through and already has eclipsed 1.6 million dollars on the way toward what could be well over 2 million by the end.

After looking carefully through the video of the kickstarter at the 3:38 mark you can see this amazing reveal of the heart and soul of this kickstarter: the real reason it is called the Dungeon of Doom; it may be inhabited by the bigger, badder brother of Conan's enemy Thulsa Doom.

Take a gander at these amazing pieces! The LED statue, the various wall pieces with intricate carvings, some with eyes, and the LED brazier with green flame. Wow!

At the time of writing this post, this has not been revealed in the kickstarter, but it isn't a secret since others have discovered it like I did by going through the video with frequent pauses to look for the cool pieces. 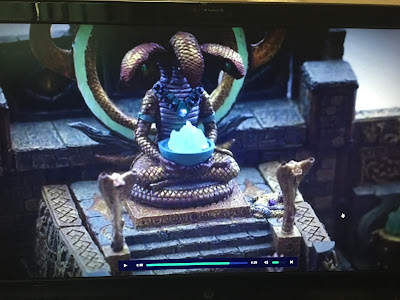 This truly is the dungeon of doom to your wallet; so much awesome stuff!

In order to focus more attention on pushing out shipments of the previous Kickstarter rewards, DF have pushed back the launch date until June 17th.

It will be interesting to see how this progresses.
Posted by OSRbaron at Thursday, June 08, 2017 No comments: