Pedro has no trouble selling his companions on the idea of exploring the supposedly cursed ruins outside the town of Troll Pass. In the morning they gather their belongings and visit the farms closer to the ruins looking for a guide that knows a little more about what they may find.

They are escorted the end of the last crop by their pitchfork wielding guide who explains that the only entrance he knows is down the hillside on the south side of the ruin. When he was a young boy he came out here and unwisely wandered around the outside of the ruin grounds. Down a hillside he discovered a cave, but strange sounds tore away what little courage he had and sent him running home. With that information he bid them good blessings and turned on his way back home.

A brief discussion later and the companions decided to enter the grounds of the ruins to seek another way to whatever secrets this ancient site holds. 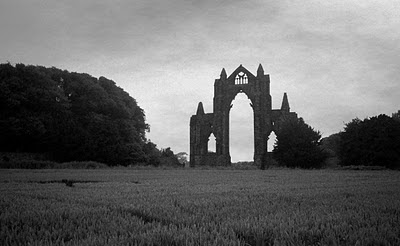 The party entered the overgrown grounds and looked around at the fallen stones of the old structure as well as still standing mausoleums. Near an old cistern were the remains of some falled and crumbled statues amid small trees and undergrowth. It was at this point that a group of giant toads leapt up to attack from hiding.

Thorgrim once again became the intended meal of the wolf-sized creature. Its tongue lashed out a full 15 feet, pulling him through low growing shrubs and weeds to the waiting maw. Another toad bounded atop the pedestal that once held a statue only to be struck with deadly precision by one of Tok's powerful sling shots.

In trying to get the toad glomming onto Thorgrim to let him go, Rowenna used her sling. Her shot was very poor and the stone rang loudly off of the imperiled dwarf's helmet. Others jumped to his aid and soon that and another of the attacking toads were dead, but the one that had been hiding in the cistern decided that Thorgrim looked even tastier with blood running from beneath the rim of his steel helm. This time he was dragged beneath the water and was obviously unconscious

Risking a bite, Pedro rushed to the water's edge and cast a hasty healing prayer on Thorgrim though he was still drowning and may already have been too far gone to survive the ordeal.

In short order the party managed to slay the remaining attackers and pull Thorgrim from the water. To everyone's surprise he was alive, but just barely, and in no shape to go anywhere on his own as he continued to cough up lungfulls of murky water.

While some of them rested and tended to their water-logged companion, the others examined two neaby mausoleums that faced each other about 25 feet apart. Atop each were two imposing figures. The one bore an angelic being with sword and shield whilst the opposing one bore a pitchfork brandishing devil statue. Translating the language carved on these graves indicated the families bore each other great ill will during the heyday of this ruined structure. (Hatefields and MacOiz anyone?)

Calling it an early day the Company of the bloody boots retreated to the safety of their guide's barn and remained there for another day until Thorgrim decided he was well enough to try exploring the ruins again.

Note: This is a reminder to the players to refresh their memory of the house rules, especially the one about shattering shields. Thorgrim luckily made his death save, but using the shields rule he wouldn't have had to take that chance.

Returning to the ruins they decided to try the cave the farmer had mentioned to them previously.
Posted by OSRbaron at Sunday, December 04, 2011 No comments: