West Marches -session something or other

A quick update, the party is engaging the bandit/cultists and their necromancer ally. It has been a series of skirmishes in which the party has come out ahead until now.

Having decided to recon the bandit lair, the party have circled around to the east and then south of the encampment. They party is presently split into three units. The main unit is comprised of four characters and one npc, the second unit is two characters and two npcs, and the third unit is one character who is in big trouble.

Unit 2 is being tracked by a force of bandits and a war dog, which they are leading into an ambush by the main unit. Anton, alone, decided to get up close to see what the encampment held. His plan backfired when he triggered a magic mouth spell alerting the camp to his presence. Things are getting interesting and will be more so when the ambush kicks off.

We left off on that cliff hanger.

Below is a rough approximation of the positions. Not to scale. 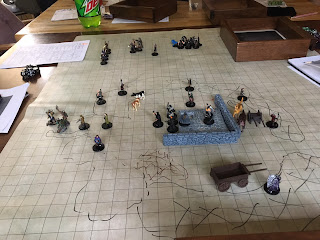 Do Dragons Shit in their Hoard? (Things you can't unthink)

I was recently treated to a surprise party and the cake was D&D themed. The main cake was a DM's Guide book upon which sat a dragon's hoard and a black dragon with eggs sleeping atop it. The hoard was created from chocolate coins wrapped in gold foil. When removing the hoard of coins from beneath the dragon, some of them were coated with bits of the caramel icing from the book cake below, and this got me thinking. 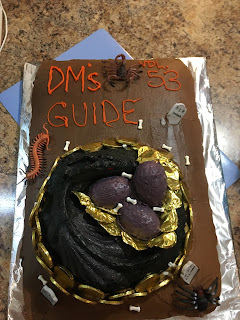 In the real world (you know, the crutch for people that can't handle fantasy) hibernating creatures do indeed defecate and urinate during their long sleep. In fantasy, dragons are said to sleep sometimes for centuries between rampages. While it doesn't really matter for telling stories it might be fun for DM's that like to gross-out, inconvenience, or otherwise poke fun at the players and their characters, to add dragon feces to the list of things found in a hibernating dragon's hoard.

While nearly all fantasy stories completely ignore the unclean aspects of reality, unless we're talking about Game of Thrones, it might be fun to explore how much more difficult for our adventurers these things can make recovering treasure from lairs. Over the dragon's lifetime it has accumulated wealth during each rampage and then hibernated upon the pile creating strata of secreted waste that a geologist could use to determine the age of the beast and maybe when each rampage began and ended. The collection of filthy lucre would have things glued together, stuff that is a challenge to identify, and would add weight and bulk to what is collected.

"You're trying to pay for a room at my inn using shit caked money?! Bunch o' fuckin' murder hobos, get out of my tavern!"

Admittedly, walking around with packs full of loot reeking of dragon waste may keep some creatures away from the party, it is just as likely to draw others to camp. "Do you want assassin bugs? 'cause that's how you get assassin bugs." Imagine crossing through another dragon's territory leaving a trail of scent along the way. Will the offended dragon follow the scent trail to the party or back to the rest of the hoard? If to the hoard, will it be there should the party return for more treasure, or maybe to the town where they carried the loot? The odor of dragon waste might make for an interesting problem to overcome. 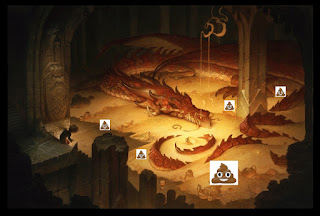 If any reader has done this or does do something like this please come and comment a brief bit about how the players reacted. Hopefully it's some funny shit.

Dwarven Forge Kickstarter 5 - Ziggurat of stairs and other goodies

The latest teaser shows some interesting pieces. Take a good long, close look. Some we've seen before like the fancy floors. There's a corner pillar piece carved like a demon of some sort, some rune stones, etc. 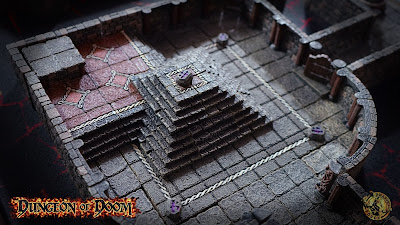 The updated date of launch is back to the estimated date of June 11th.
Posted by OSRbaron at Wednesday, May 17, 2017 No comments:

Here is the latest peek at stuff coming in the new kickstarter project. Traps. 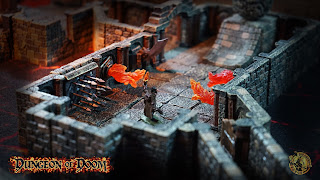 While I am not interested in most of the trap pieces, I did notice the stone ramp which if painted to match the sewer set and offered as a pack of 4 would be on my list for a potential add-on to acquire. A slick, steep access point to a lower section of sewers and dungeon would make for a nice minor challenge to descend, and an obstacle to ascend (especially when being pursued by nasty critters).

It now looks as if the launch date is expected to be June 9th.
Posted by OSRbaron at Thursday, May 11, 2017 No comments: