The party had freed the grey dwarves from their Drow slavers and were making way toward the shoreline where the ship was waiting. Not far behind and gaining on the group were two ettins and three hell hounds.

The dwarves were sent rushing ahead where they discovered a bat fluttering around in the daylight stalking their movements. We never did discover who's familiar it was. The adventurers acted as a screen to the rear.

Eventually those pursuing caught up and battle commenced. After some initial difficulty the party vanquished the foes.

After getting everyone back to Stormreach, the dwarves were quartered in the Silver Flame temple compound where the high priest excitedly asked questions about their history on Xendrik.

The question of finding the missing wizard is still an unresolved matter, but there are no good leads and no inclination by the party members to whom it matters to seek divinatory methods to locate the spell caster.

It was then decided among the party that the ship's crew would be sent on another beer delivery/sales run to Three Barrel Cove while the party ventures deep into the continent searching for the prison of the demon lords. The high priest has asked Ennark to look for a way to cleanse the Silver Flame of the demonic influence.

That is where things left off. 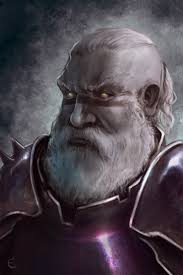