Let's play around a bit with making a monster using the framework of one that already exists in the Monster Manual. For this one we'll go from a devil to a sci-fi horror.

We'll use the CR9 Bone Devil as our base for the creature. You can find it on page 71 of the 5e Monster Manual if you want to reference the critter while reading the conversion. 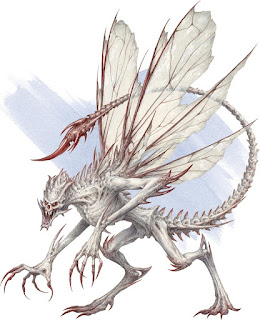 Our goal is to transform the base creature into a Xenomorph from the Alien/Aliens movie franchise. It's a surprisingly easy conversion.

Working our way down the stat block:

Large monstrosity (xenomorph), neutral (scary, but they seem to just be doing their natural thing)

Armor Class and Hit Points can remain the same.

Speed is good at 40' on the ground. Remove the flight speed. Our alien doesn't fly. Add a Climbing speed of 20' since these beasties can climb well, but not too fast.

Ability Scores can be left alone unless you want to fiddle with them. We know the xenomorph isn't just a dumb brute, just an overconfident one, with some cunning and a very intimidating presence and not prone to fear.

Saving Throws need to swap from a mental set to physical set. Since the Bone Devil has a +4 Proficiency Bonus that makes the saves STR +8, DEX +7, and CON +8.

Skills change to Stealth +7 and Acrobatics +7.

Damage Resistances remain the same with one exception, silvered weapons should be taken away.

Damage Immunities is a quick swap. Remove fire and replace it with acid.

Languages can be whatever you want, perhaps sticking with Infernal. Drop telepathy.

Challenge Rating should be reduced to 8 (3,900 xp) since our scary xenomorph is actually less dangerous than the Bone Devil. You might decide to keep it CR9 if you believe adding Acid Blood and Degrade Weapon makes up the difference.

Acid Blood: When struck by slashing or piercing weapons in melee combat, the Xenomorph's blood does 2d4 acid splash damage to the attacking creature. The creature makes a DC 14 Dexterity saving throw taking half damage on a success.

Multiattack. The alien makes three attacks, one with claw, one with bite, and one with tail spike.

Bite. (Add this one in to represent the iconic bite of the alien). Melee weapon attack +7 to hit (using dex), one target. Hit: 1d4+3 piercing damage and the target must succeed on a DC14 Constitution saving throw or become paralyzed for 1 minute. The target can repeat the saving throw at the end of each of its turns, ending the effect on itself on a success.

Tail Spike. Melee weapon attack +8 to hit, one target. Hit: 2d8+4 piercing damage and the target must succeed on a DC 14 Dexterity  saving throw or be knocked prone. (Take away the poison and replace with knocking the target prone to better fit the creature).

And there you have it, one very nasty sci-fi monster ready to terrorize your PCs and their players. 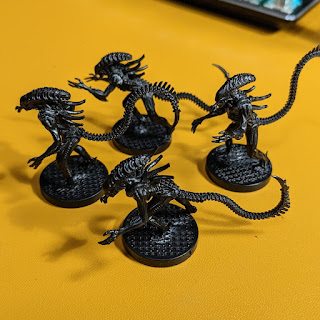 I bought a box of Xenomorph miniatures just to use this modified/re-skinned creature in my campaign. That encounter is still a long way off, but will undoubtedly have the players on edge since they're much more familiar with the alien than the bone devil. (Ptolus, Banewarrens, Osyluth Pods, for those that know).