The party had returned to the library to discuss the next step in the investigation and search for artifacts. The allure of the observatories proved too much to withstand and this time it was Anton that led the group down into the Spacial Observatory.

The place showed some signs of damage to the southern end where stairs and a portal stood. To the east and west were viewing stations with a much larger one to the north. Curious about what could be learned from the viewing windows, Anton, Cotton, and A'lan each chose one to look through.

Anton went first and chose to seek the whereabouts of the missing wizard Tovin who had eluded the party. He was able to focus his mind with the aid of the window and was shown an image of Tovin sitting in the tavern in Three Barrel Cove on the island where we had failed to locate him previously. "All that time he was right there and we missed him."

Tovin became aware he was being watched and started to look around. Anton immediately began trying to pull his mind free of the portal wiondows hold, but became wracked with pain. It was Ennark that realized the danger and aided Anton in breaking free of the giant's technology.

The scene repeated, this time with Cotton trying a few different searches which all failed until he focused on the party's ship. He found it to be waiting as instructed for the return of the group. Cotton was able to free himself from the hold of the window on his mind.

Again a view was sought, this time by A'lan, looking to locate his House contact who could mysteriously appear as different people, from a small girl to different adults. The scene was one of gratuitous debauchery. His contact sat at a table viewing nude dancers on a stage while all around him people engaged in an orgy. Most participants were elves and it seemed that this might be within the House itself. A'lan tried to free his mind from the depraved scene, but it refused to let him go and he too suffered intense pain. Ennark came to his rescue as he had done for Anton.

The hold of the windows broken, the party joined Eldrid who had been trying to decipher writing by the badly damaged southern portal. Eventually Ennark, the least gifted in arcane knowledge got lucky. Advenced Research Laboratory was inscribed upon the stone arch above the pathway. Already in likely trouble from the giants above, the party decided to venture into the lab.

Within, it was illuminated in green by myriad luminescent fungi and other plants. At first the party stood staring, trying to take in the environment. Eventually A'lan noticed a portal at the far end of the room, exhibiting a reddish glow. He approached and looked out onto a bleak reddish landscape. In the distance he noticed what might be people upon a hill above the broken stony terrain. A'lan drew forth his spy glass to get a clear view of this curiosity and quickly discovered the crucified forms of Angels.

He had no time to mention this to the others as he came under attack by a mental assault from a fungus creature. The creature caused pain and confusion with a psychic assault, followed up with lashing of it's acidic tentacles. A'lan ran, maddened, as far from the thing as he could. Meanwhile the party began to respond to the threat.

This foe proved difficult to defeat, confusing almost all of them. It destroyed Anton's metal hound construct utterly and chased Anton toward where A'lan had hidden. As this chaotic battle raged, two more opponents leapt through the portal from the hellscape. A pair of great, orange, ape-like demons, enraged, preparing to tear apart their targets.

It was Eldrid who overcame the confusion long enough to deal death to the mind wracking fungoid. With it's domination of the party undone, they began a fighting retreat, intent on withdrawing back to the observatory, away from the new threat. They needn't have worried. The demons were quickly dispatched though more injuries were suffered by members of the party.

Escaping through the portal to the Spacial Observatory they began discussing what to do. Leave altogether, rest here, rest in the library? The library won out as a resting place to recover from wounds before making any other decisions. 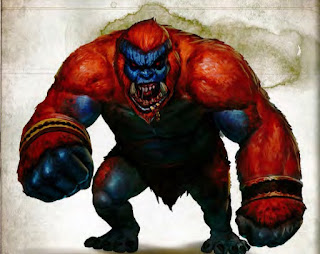 Posted by OSRbaron at Thursday, September 22, 2022